Hello there,
Today's not really a real post. I've just been working on some little projects and wanted to show you the stuff I've made.
First of all, this is a little doll I made with a lot of difficulty. I've never sewn before so I needed a lot of help from my
dear mother, but I finished it eventually! 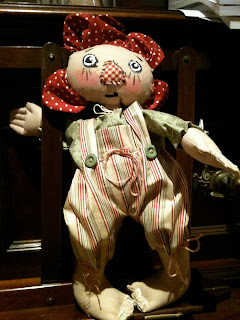 I'm quite proud of her!
I've also been making a big sketc
hbook filled with a lot of the stuff I created for my novel to help me write it. I don't want to just throw it all out so I've been putting all my drawings, maps, character profiles and notes into a big scrapbook. I still have quite a bit to do but I'm getting close to finishing it! Here are a couple of pages: Enjoy! 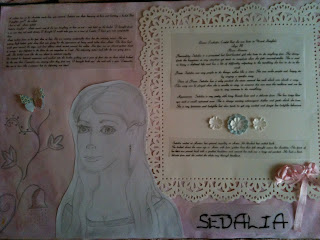 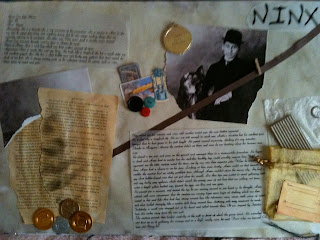 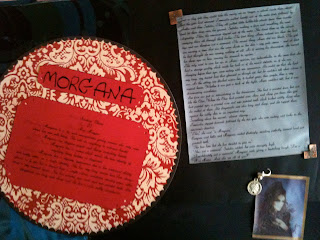 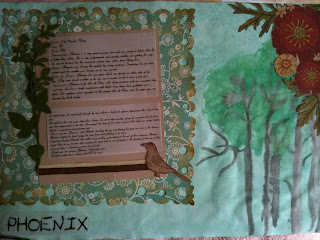 I just got home from YABC, and, feeling a little bit crappy and down on myself, I had a good chat with Dad in the car. Now there are a few things I want to say to explain to you the mimi revelation I had so please be patient.

1. My Dad once told me this story, and it went like this. Everyone knows we have souls, as intangible and invisible as they are. Our souls are what we stem from. Think about an egg, white and clean. Inside the egg, a bright light is glowing, but you can't see it fully because it is blocked by the shell. That egg is your soul. Now, take a pin, a prick a hole in the egg shell. The light shines through in one straight line. That's a potential you. Maybe that is the you that you are. Take the pin again and prick more holes. Each of these is a different version of you. They can seem totally different, be men or women, different races, ages, all sorts of things. But basically they stem from that one egg, from your soul, and though the light shines in different directions, it is the same light.
Sound a bit wacky? Bear with me.

2. When I was in year ten drama, we had a man come to speak to us about method acting. He told me that the majority of actors don't act, they pretend. They can only act something that they have experienced, hence the method acting. You cannot act a pregnant teenage girl unless you have been a pregnant teenage girl. That would be 'pretending'.
I found this an absolute load of crap. I really truly disagreed. It annoyed the hell out of me. I thought, what that theory is doing is demeaning every piece of work non-method actors have done, and saying that they can't feel the emotion. He was telling me that anything I feel when acting is false.

3. I'm sure we all feel it sometimes; that we just can't play a character, or do a certain style. We say 'I'm not this enough or that enough' and that's what I said to myself at YABC today. Talking with Dad on the way home, he told me something interesting. He said: we each have every single character inside us. We may not be homeless, but it can happen to us, we may not be a murderer, but we can murder. As dark as that sounds, it rang true. And he said the best actors are once that recognise that every single character we can dream up is inside us, some portion of it is real for us.
This got me thinking about the egg, and about method acting. Here's my new acting philospohy: We may feel like we can't play a certain character because that is not who we are at this moment, but we have to think about the egg and the other pricks of light. Those are all potential me's out there, those are all the characters I can be. They're all inside of me and I just have to find the right tools to get them out. I have to watch similar characters, understand the emotions, maybe even use my writing as a way to connect with them. I can't box myself into what I think 'suits' me and what doesn't, because in actual fact, anything can suit me. And while I may not be able to play certain characters now, I can find something true and genuine about that character in me and develop it, and watch things and learn from them and work on it, and that's what actors do. It's acting. Method acting is living, and that's fine, but don't try to tell me that non-method acting isn't partly living as well.

So that's what I wanted to say. It helped me today, and made me understand something new. Maybe it'll help you as well. 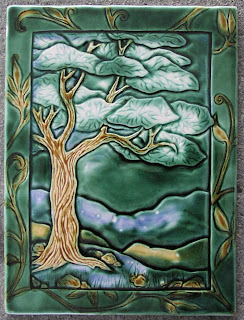 What's in a story?

"The moving finger writes, and having writ moves on,
And all your piety nor your wit can lure it back to cancel half a line,
Nor all your tears outwash a word of it"